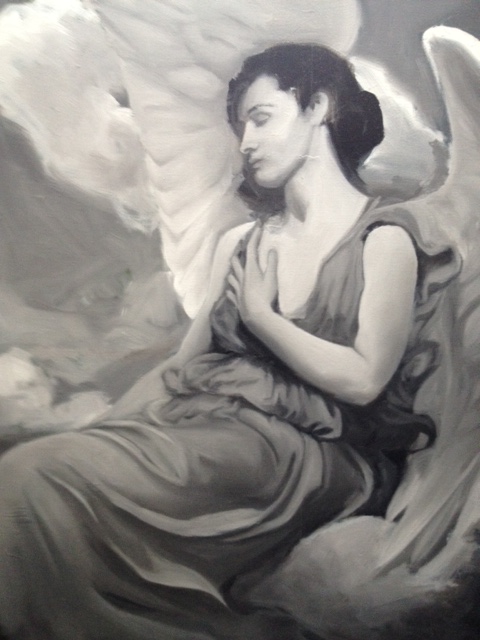 The Alice Gallery this month opens an exhibit featuring three Utah artists, though visitors would be forgiven if they mistook it for the work of four. Exhibiting artist Rebecca Pletsch makes her impact felt in two distinct mediums, painterly oils and photographic collages. At once one is unsure of how to approach the luscious oils or the cryptic collages, till one begins to participate in the works themselves.  The paintings are narratives but not in the traditional sense.  They are but one precise moment in the narrative, one of intense emotion, and the viewer is left to their own devices to use meaning to reconstruct a narrative that applies as seem fitting.  These devices are signifiers of meaning, found through associations, suggestions, moods, temperaments, inspiration, intuition, any manner of deduction via the sensibilities, just enough to substantiate, for self satisfaction alone, the meaning of these narratives as they exist for the viewer.

The collages also lead to an ultimate synthesis, albeit one must use tools that create meaning through logic such as contradiction and agreement, balance and disturbance, signifier and signified, compare and contrast, unity and disparity, homogeneity and chaos, being and absence.  With such conceptual qualifiers of meaning, this collage induces an amalgam of a multiplicity of meanings and themes drawn by the use of logically based qualifiers of meaning, generally more profound and universal, although there is sublime profundity in intense emotion as Pletsch expresses so beautifully and naturally in her paintings.

Pletsch’s emotive paintings and narrative collages unearth meanderings of meaning that will have certain signifiers that will signify equally for a broad number of viewers.  It is a given that each viewer is responding to the same qualifiers.  In this established unity of ideas, this agreement of reconstructed meaning, made possible through commonly held signifieds, securing that meaning in the minds of a plurality of viewers, the bridge beyond core meanings traverses to a deduction of actual truths, undeniable truths in the eyes of the many.  The immensity of this universalized meaning circumscribed into truths, therefore lays the ground for actual basic natures of reality, introduced into the paintings just as in life sensibilities are the same, into the collages just as in life cognition is the same.

In Rebecca Pletsch’s case, this is a very contemplatively produced oeuvre and one that is also germinated through equal parts heart and soul and therefore, is an optimal occasion to take the viewer for a reality inducing drive via the learning curves on the road with existentialism at the wheel. One might cruise many avenues of authenticity, ride numerous paths of purpose, leaving the viewer breath taken by the views of verity, leaving the viewer dazed, and ultimately amazed by the possibilities of existence and a true and the very real optimism and potential of today… a strange twist to the dire and doubting existentialism of yesteryear.  It is just that black and white.

Pletsch’s paintings are monochromatic, purposely stripped of one of painting’s more emotive qualities — color;  yet they are boldly expressive of tense emotional moments, moments that exist within an existence, but that existence is not revealed.  All that is given is a state of a lushly and sensually while intrinsically emotionally rendered form, locked in emotion within space and time. In “Melancholy,” a painting that reprises a classical theme that has fascinated many artists, including Albrecht Durer, an angel, painted in a distinctively Baroque exuberance, swoons while placing her left hand on her right bosom as if communing with her own soul.

Yet, this already is circumscription; if the viewer takes only the information given and leaves the swooning of the angel, placing of the hand on the bosom, communing the innermost self, engagement with the soul, all is stripped and negated to pure form, that is, without meaning.  As it stands, the figure has already been transcended into the regions of meaning by the rational mind that reconstructs.

Asserting such reconstructed meaningful substance and to further the narrative already begun, this emotion might be seen as the aftermath of an experience like Bernini’s High Baroque “the Ecstasy of Saint Teresa,” where the nun is pierced by the “pure love of God,” recoiling into her own being upon an intense experience of extravagant emotion.  Ostensibly, this angel too has experienced something truly powerful.  She seems as if in an exhausted state and gathering an immensity of emotion into her core to find a calm and a peace.  Yet all is surmised.  Nothing is given but the black and white form.  It is left to the awesome ability and creative power of the human mind to do the rest, to reconstruct.  The mind cannot help but to engage.

In “Penitent Angel in Black and White,” a second angel is captured in another pensive, ambiguous state. Her body is held tight, her teeth clenched, her eyes fixed in a gaze cast vacuously and slightly downward as if to avert all other eyes from hers while at the same time revealing introspection. With eyes so mute and a body so poised, she too is brimming with emotion, this angel who might not like it to be known.  A harsh reality check perhaps?  What might seem like a description from a passage by Milton is in fact completely reconstructed meaning by the mind that cannot help but to do so naturally.  The mind is imbued a priori with natural conceptions, says Kant.  These establish a mind allowing for rational thinking, creating a synthesis with sensory empirical experience and therefore a reasonable intelligence.  This intelligence cannot be switched off.  This is human reality of thought creating a natural disposition towards rational thinking and meaningful discovery.

We may find exemplified this human pursuit of truth in a third painting as we are given very little information and the human mind seeks to know.  Here a charming woman with a milky white complexion is seen in profile against a dark background.  Her lips are poised, her eyes are shut and lowered with a solemn air, her shoulders and neck bare, her hair cropped in the “bob” of the painting’s title, and she clumsily holds to an assortment of roses.  This painting, like the others, staid in timelessness and spacelessness, has perhaps the weightiest signifiers to render from her form myriad narratives that could all be utterly convincing.  For example, it seems as if she has just stepped from some existential trauma, or, she has been overcome by some joy or other immensely life altering moment, she might be in love thinking of her lover, but above all, she is truly stoic using her utmost energy to remain stable and composed.  Perhaps when given less the mind compensates with more.

The second half of Pletsch’s oeuvre is collage, a part of her work that requires a different kind of approach to facilitate a meaningful response, one grounded in logos, moving away from any trace of pathos.  Pletsch’s collages are germane to larger, more conceptually abstract ideas and ideals, with universal leanings.  A fundamental principle of these collages and a fundamental tool to absorbing meaning in such a context is to utilize powers of connectivity, a sure qualifier of meaning that utilizes other qualifiers in the relationship, such as contradiction and agreement, balance and disturbance.  Therefore, there is no limit to the resultant meanings.  The collages are fragmented and disparate, they will not only not make sense, but will fail to lack meaning if the viewer does not employ the powerful device of connectivity, and utilize logical signifiers of meaning to create a wealth of connected meanings in the mind.  Such an engagement is enlightening and strengthens cognitive ability and endurance.

Pletsch’s collages are a step above the rest.  Collage is perhaps the most commonly used artistic medium today fitting the post-Modern paradigm seamlessly.  Her work is not the general body of replicated imagery with standard visual appeal, but a sensitively pensive, inventively articulated, and abundantly intelligent, meaningful collage that is ripe with visual signifiers to create a reality of meaning from, revealing the ability of the human mind to create universal and relevant thoughts from scraps of waste paper.

“Over the River and Through the Woods” reads from left to right, showing a countryside, perhaps English, overlaid with a transparent gray form into which three windows have been cut. They call to mind a train carriage, an association further emphasized by what appears to be a train track and station, or perhaps a racecourse and stalls. Contrasting this image, to the right, in a brighter, sepia-tone, we see the fragment of an exotic image, camels with riders at a pool of water against one of the Great Pyramids at Giza. Both idyllic views of two untouched worlds would be drastically altered by the industrialization so forcefully symbolized the movement of the train.

“Journey Through Night” is another collage of contrasts. In the center, the night scene of a great city, perhaps Chicago in the 1950s, is lit up by beams of light that shoot from every corner. It is flanked on either side by an image from a dramatically different place and time: on the left a wagon train crosses the plains, and on the right rider on horseback appears to be observing the train as both pursue the American idea of Manifest Destiny. The value of the city and the effect on the natural landscape is an existential question left up to the individual.

“Two,” has a slightly different approach, more disorderly and less finished. A black and white magazine article has been smothered by several sheets of chalk-scrawled, coarse paper. Atop this sits the image of a cloud, and the torn piece of paper featuring a dove holding a scroll in its mouth: “be mine.” This intimate note is juxtaposed against the 1920s black and white images below that show masses of people with their backs to the viewers. The magazine is time which is as soon lost as it is found, the dove representing peace is upside down as the reference to the Valentine endearment may refer to relationships, made of two, that do not last, ultimately, and all that are seen are the backs of those from the 1920’s who have been long past, in these paper fragments, the only remnants keeping them alive.

Pletsch’s works are an exploration of the incredible depths and expansiveness of the utilization of derived meaning and the actuality of the human ability and tendency to create such meaning.  Through an agreed unity applying abstract means to build ideas, given the subjectivity of the agent will.  Whether exploring possible causual circumstances and associating with deeply emotive private realities, or grasping larger, universal truths of existential society, histories, and humanity, these are moreover, excellent demonstrations of the brevity of astonishing human capabilities taken utterly for granted.

Emotion in delicate shades and nuances are recognized and responded to clearly and unanimously by the mysterious depths and senses of sensibilities breaching an invisible barrier towards unequivocal intrinsic perception and application.  The power of human cognition is able to deduce, from fragmented and disconnected signifiers, via a priori concepts, allowing a reasoned and rational assertion, through connectivity of signifiers responsive to empirical phenomena.  Both of these methods of meaning are substantial and formative in the innately existential inner-human quest for truth and understanding.  The ultimate attainment of enlightened, able, and reasoned reality of being takes some effort. 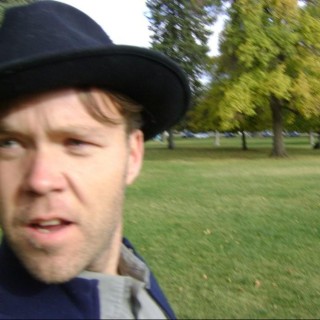 Art’s aim is truth. Art’s content is reality. Art’s aesthetics are my job.

Search For Artist by Name